If we were to describe our unexpectedly
surprising destination in just a few words:

If we were to describe our unexpectedly surprising destination in just a few words:

We hope this insight of the country inspires you to prepare your next visit. See you soon in Portugal!

PORTO & THE NORTH
OF PORTUGAL

It was here that it all started, this region is known as the birthplace of Portugal. It has a rich and fascinating heritage. This is a mountainous area with rivers, natural parks and steep, sloping hillsides covered with leafy vegetation. The granite from its mountains was used to build many of the region's religious and historical monuments, such as the unpretentious Romanesque chapels and the rich Baroque churches, or what is considered the oldest castle of the nation, the Guimarães Castle where its founder and first king D. Afonso Henriques, lived.
Porto or Oporto in English, is located on the north bank of the river Douro, the second biggest city in Portugal shows its strong character at every sight.

Being the centre of business and industry in Portugal and of constant cultural dynamism it offers the visitor a fantastic sense of energy and hospitality. Alongside the signs of growing tourism options and prosperity, the result from the unquestionably enterprising character of its population.

The river Douro has indelibly marked it in every way: historically, socially, architecturally, even the name ‘Porto’ stands for Port, the wine, but primarily for ‘harbour’ in Portuguese. Douro is one of the most important and emblematic rivers flowing in Portugal. It is in its steep slopes that the famous Port wine is produced, symbol of the region and one of the most popular drinks in the world.
JTo the northeast, one can find olive oil production and the almond trees that, in the wintertime, color the landscape white as if it is snow covered.
The Valley of river Côa, a tributary of the river Douro close to Spain is world-known for its pre-historic Rock Art, on display, open air, on the schist outcrops.

Porto and Douro are classified WORLD HERITAGE by UNESCO. 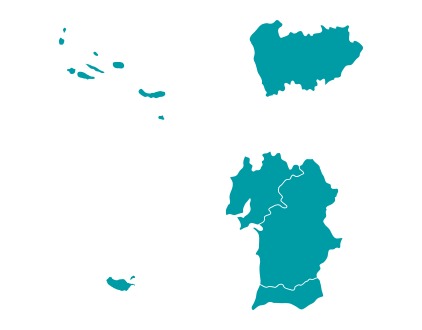 The art of hospitality

In the Centre of Portugal find a huge variety of nature, biodiversity, history and culture.
Framed between the green North, the blue sea and white sandy beaches to the East, to the West the mountainous Serra da Estrela close to the border with Spain, and to the South the vast fertile plains that change to hot and dry in Alentejo.

The tranquillity of the mountains where flocks of sheep make it their favourite habitat, and the dense Forest of Bussaco with a vast diversity of animals, contrasts with the vast plains where bulls and horses are kings and grow wild and movement of the coast. Find glacial lakes, spring waters and thermal springs, fertile soil and a marvellous coastline where the sea rumbles in fury allowing great surfing conditions.
The Centre of Portugal is also a region of warm hospitality, offering visitors genuine ‘village’ tourism as in the Schist Villages, in the Historical Villages, in the authenticity of their rituals, their popular and religious festivities. Fátima is one of the most important centres of Catholicism in the World, while Belmonte is a landmark of Judaism in Portugal.

Coimbra is one of the most important cities in Portugal and once residence of the first Kings, nowadays known mainly for its university dominating the sights, one of the oldest in the world from 1290. The quarter around it is listed as UNESCO World Heritage Site. The impressive monasteries of Alcobaça, Batalha and Tomar are part of the list. Not to be missed is the charming walled town of Óbidos.

Not forgetting the local gastronomy: cheese, sausages, mountain honey, Aveiro is to be mentioned for the famous Portuguese codfish, cooked in so many different ways, the fresh fish and the egg sweets. 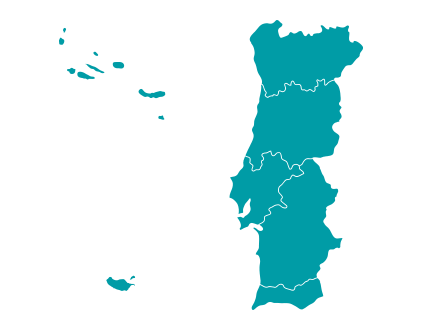 A unique place for business oportunities. Glamour and nature, history and cosmopolitanism.

The first impression of Lisbon is Light. Many hours of sunshine intensified by the light colors of the façades, the reflection of the river Tejo and the low level of pollution create this brightness.

One of the oldest cities in Europe it has been a meeting point for cultures from all over the world. Lisbon has undergone a series of adjustments and face-determining metamorphosis and nowadays old and new are side by side in perfect harmony. The welcoming nature of the Portuguese is the human element that makes the difference: it’s a vibrant place!

The city is an open-air Museum with uncountable belvederes and a showcase for architecture. There are findings from the Roman Empire, the Moorish style quarters are a vivid presence as the medieval castle overlooking the city. The centre was rebuilt after the earthquake of 1755 in beautiful Portuguese ‘Pombaline’ style.

Belém, by the water, is undoubtedly a must-visit neighbourhood with monuments as the 16th and 17th century Tower and the UNESCO classified WORLD HERITAGE site Monastery of Jerónimos, the 19th century Electricity Museum, the 20th century Coach Museum, and the newest 21st century building of MAAT, Museum for Art, Architecture and Technology. The ‘Pastel de Nata’ is probably the most famous sweet in Portugal, originally produced in the still existing factory in Belém.

The area of Park of Nations was entirely planned by renowned architects to host the World Exhibition in 1998 and developed to be a 20th century full living neighbourhood. Lisbon keeps re-newing itself, being awarded “European Green Capital 2020”. The city was recognised for its work during the past decade in becoming greener.

A short distance from Lisbon

The areas around Lisbon, SINTRA, CASCAIS, ESTORIL located to the West, are known as the Golden Triangle, adding the posh resort atmosphere, mountain, forest and beach to the intense living style of the city.

Sintra known for its royal palaces from different epochs and palace-like houses on the slope of the mountain, also classified by UNESCO as World Heritage site. Cascais, once a fishermen’s village is nowadays one of the most popular tourism destinations. Together with Estoril offer to visitors looking for relaxation and glamour a wide number of options. The west Atlantic coast is partly Reef – World Surfing Reserve of Ericeira. Locals come to the area for seafood and fresh fish.

Going south from Lisbon, Almada is the closest city south of Lisbon known for the statue of Christ the King, inaugurated in 1959.

The mountain of ARRÁBIDA and the peninsula of TRÓIA, are a Nature Reserve and the ‘Paradise’ for lovers of calm beaches with crystal clear Atlantic water.

Golden plains that disappear out of sight combined with the heat of the sun set the slow and steady rhythm of its people’s ways of life.

The interior region is characterised by vast golden wheat fields that undulate in the wind, opposed to a rugged coastline of unspoiled and unexplored beaches.

The open, ample landscape is scattered with cork-oaks or olive trees that have withstood the ravages of time. Nowadays, vast fields of vineyards, olive trees, sunflowers add color to the landscape.

In the Alentejo the harsh climate and soil dictate the way of life. Perhaps this is why the region's culture and gastronomy is so unique and rich. Nowadays, so popular for Rural tourism.

Évora is known as a city-museum for its patrimony, historical, architectonic and cultural, resulting from the settlements of different peoples, since the Roman times, mainly to trade and as a religious centre. It is listed as World Patrimony by UNESCO. The region is also the capital of Megalithic in the Iberian Peninsula. There are several other small, white-washed villages as Marvão, Estremoz, Reguengos, Monsaraz and Vila Viçosa looking like coming out of fairy-tales. The area of the dam of Alqueva is a Dark Sky Reserve, an exceptional place for star gazing.

The gastronomy of Alentejo is inspiring for many Chefs. Based in simple ancient ingredients as the unique bread, lamb or pork, some growing in the wild, and local herbs perfect for the vegetarian food lovers. Table wines are among the most recognised internationally. 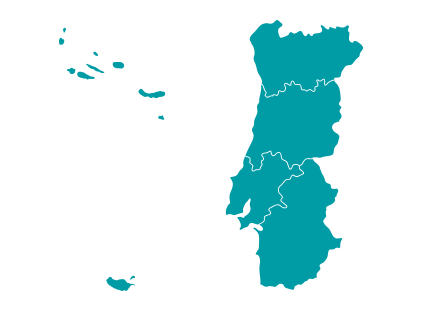 Portugal's southernmost coastline where the sea is endless. The Algarve's beaches are among the best in the world and there is so much variety to choose from - hidden beaches, rocky ones, long white sandy beaches, family beaches, crystal-clear beaches with or without waves.

The Algarve has so much more to offer. The sea is tempting, the climate is wonderful, the gastronomy is healthy and varied. There are excellent hotels and conference venues. The holiday villages, hotels and luxury resorts are superb places to stay. Enjoy the atmosphere, the climate and the traditional seafood on the terrace of one of the many coffee shops and restaurants.

Outdoor activities cater for many different preferences including golf. The Algarve has some of the best golf courses in Europe, football, motor racing track and other sports facilities. Spectacular cave formations, hiking trail on top of the cliffs and long sunsets make it a preferred location for photography lovers.

You will surely be tempted by the modern therapies and the massages on offer. Why not treat yourself to a dip into one of the greatest region's spas?

Faro is the most important city. Some remains from the time of the Moorish occupation can be seen as the arch entering the historical centre. Lagos’ historic centre shows its extensive history, authentic cobbled stone streets and a wide selection of restaurants and bars with buzzing nightlife.

It was from Sagres, “the end of the world” that the Portuguese caravels set sail in the 16th century with the pioneers that were to reach faraway lands as Brasil, South Africa and China.

THE ISLANDS
OF AZORES 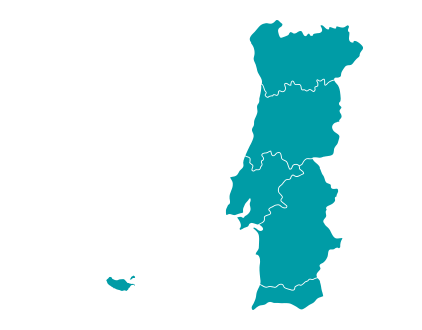 A place on earth from another world, perfect to ‘renature’

Think of a place, halfway between Europe and America on the Atlantic Ocean, where nature is unspoiled. This is it, probably one of the richest in biodiversity in Europe.

The archipelago are nine different islands of adventure, nine delightful surprises as dolphins and whales frolicking in the sea can be seen, unique birds and sea animals, or volcanic landscapes covered in green.
All islands have something unique to offer, some of them part of the list classified by UNESCO as WORLD HERITAGE sites as the Lagoons of Sete Cidades in São Miguel. Some with a dramatic volcanic cone that dominates the landscape as in Pico, some with high cliffs formed from black basalt as São Jorge. The must-see area of the last volcano erupting in 1957 at Faial, the flower garden-like of Flores or Corvo, the religious celebrations at Terceira, the reddish sand at Santa Maria, and of course, you will want to discover the hot water and the steam that escape from the vents of the volcanoes on the island of São Miguel.

If you are into meat here is some of the best in the world as animals grow in the wild, and not to miss is the famous ‘cozido das Furnas’, a stew cooked slowly inside the steaming soil. Other organic options are worth mentioning as cheese, the tea or the tastiest Atlantic fish.


Find OUT MORE
Previous Next

THE ISLANDS
OF MADEIRA

Tropical with an European touch

Madeira offers the ideal mix of unspoiled tropical beauty and urban sophistication. It is a mix of refined & authentic  holiday destination, set in a spectacular landscape with a wonderful climate. The top-quality hotels and excellent service provide everybody a sense of comfort and a friendly and welcoming atmosphere.

Madeira is a tropical island. The Laurissilva Forest, in the Madeira Natural Park, is the largest evergreen forest in the world - a characteristic that has earned it a classification of WORLD HERITAGE site.
Funchal is the capital, built as an amphitheatre facing the surrounding ocean, always blue and visible from wherever you are. This is the perfect scenario for the New Year’s fireworks show.

Only 80 km/50 miles away is the island of PORTO SANTO, a paradise for beach lovers with warm Atlantic water all year around.